I have read some, but not all, of Austen. I saw the trailer for this adaptation that came out last year and it looked fun. I can’t remember exactly when but I picked up a copy of the book from the Lifeline Book Fair, it was sitting on my shelf, and since I like to read books before I watch the movie, I thought I’d better get to it.

“Emma” by Jane Austen is a romance novel whose eponymous heroine Miss Emma Woodhouse is a wealthy young woman who lives with her eccentric hypochondriac father in a large home in the bustling English village of Highbury. With her mother dead and her sister married and moved out, when Emma’s old governess Miss Taylor marries as well, Emma finds herself the undisputed mistress of the house and in need of entertainment. Buoyed by the success of matchmaking Miss Taylor with the eminently suitable Mr Weston, Emma turns her sights to other potential matches. She befriends a pretty young girl of unknown parentage and decides to orchestrate a match with the energetic vicar Mr Elton. Ignoring the warnings of family friend Mr Knightly, the older brother of her sister’s husband, Emma’s plans begin to go awry when it becomes quite clear that people, including herself, will follow their own hearts.

This is a clever novel with a likeable protagonist who is as flawed and human as she is beautiful and wealthy. Emma’s unique position as the mistress of Hartfield with a father who is reluctant go out or get involved in anything affords her a considerable amount of freedom compared to other women during the same era. I really liked how Austen tempered Emma by making her good at piano yet envious of her sometime rival Jane, and mostly kind but a little cruel towards Jane’s warm-hearted but a little overbearing aunt Miss Bates. Emma undergoes significant character development and there are some fun twists in the story.

This book was written just over 200 years ago, so it is unsurprising that there are some elements that don’t really stack up against today’s standards. This may be a slight spoiler but I think the most obvious example of this is the age difference between Emma and her ultimate love interest. The suggestion that he has been waiting since she was a young girl to grow up sufficiently did have a bit of a grooming vibe to it even if nothing untoward happens. Even though some of Emma’s views about class are tested by the other characters, and there is some sympathy for characters who have fallen somewhat in station, this is ultimately a story about a stratified society and people marrying appropriately for their class.

However, I think probably the most difficult thing about this book is that it is, unfortunately, quite a slow story. The romance is a very quiet burn, the characters aren’t all that colourful and it was a bit of a slog in the end. I quite enjoyed the adaptation because it brought a bit of colour and drama to the story, even though it too was a little slow.

An interesting and character-driven novel that admittedly took a bit of work to get through.

Speculative fiction about an England where rabbits are anthropomorphic

I’ve mentioned this author a couple of times on here previously: once when I saw him speak at an event and got my book signed, and when I reviewed one of his books. I really enjoyed hearing him speak about writing funny books, and he is one of the few authors who makes me laugh aloud. While we are all waiting eagerly for a sequel to his novel “Shades of Grey”, I was thrilled to see that he had a new release this year and even more thrilled that it appeared to be about rabbits. I don’t think anyone would be surprised to know that I love rabbits and without even reading the blurb this book had considerable appeal to me.

“The Constant Rabbit” by Jasper Fforde is a speculative fiction novel about an alternative England with anthropomorphic rabbits. For over 50 years, rabbits have been able to walk upright, speak, have jobs, start families and have become the target of considerable discrimination. Public servant Peter Knox works in a seemingly innocuous job and lives an unassuming life with his daughter in a small village. However, when two rabbits and their children move in next door, Peter must confront his past and his own role in the anti-rabbit policy to force England’s rabbits to move to a MegaWarren in Wales.

I was absolutely the perfect audience for this book and I enjoyed it from start to finish. This was a really amusing book that had me laughing aloud at multiple points. However, it is also a really clever book and the rabbits are a fantastic allegory for racial politics in the UK today. Fforde presses the reader to consider the whole spectrum of bigotry from failing to speak out against discriminatory jokes all the way to outright violence and vilification. It was also really interesting to see how Fforde interwove typical British politeness with conservative, exclusionary views. Peter was an excellent, complex character who struggles to reconcile his own progressive views with the system he implicitly supports through his work. The interactions between himself, Constance Rabbit and her husband were among the funniest parts of the book. I also really liked the way Fforde wrote about disability focusing on individuals and accessibility rather than the particulars of the disability itself. Fforde also leaves plenty to the imagination when it came to how rabbits became anthropomorphic, though I loved the interlude of an alternative history for the Big Merino in Goulburn.

This was a thoroughly enjoyable and extremely relevant book and I cannot wait to see what Fforde comes up with next.

I received an advanced reading copy of this book courtesy of the publisher. I don’t read many mysteries but I’m always eager to try new things and with autumn just beginning here, a novel set in a British manor was just the thing to cosy up to on a weekend. 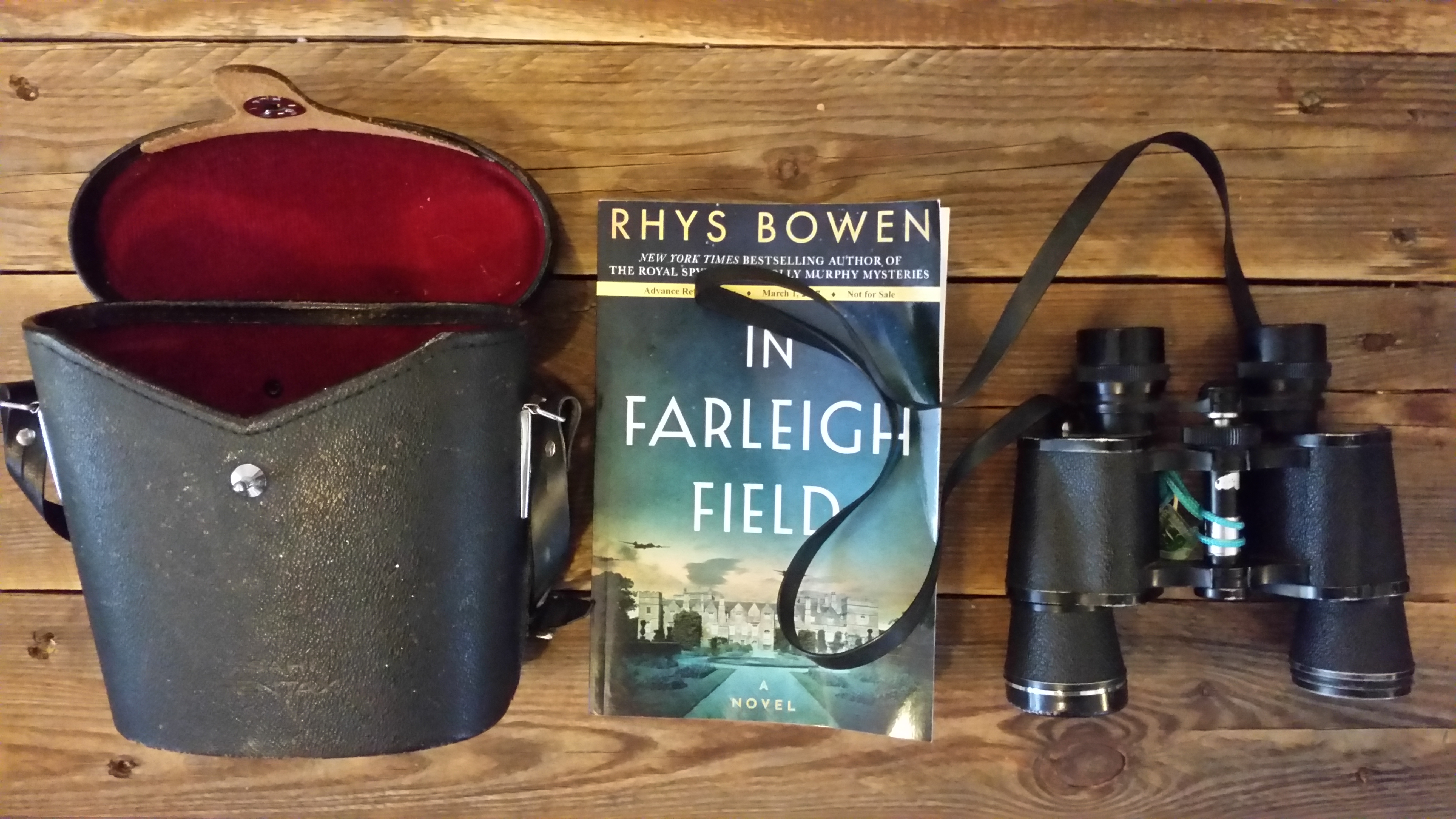 “In Farleigh Field” by Rhys Bowen is a novel about an upper class British family during the 1940s. Lord Westerham, his wife Lady Westerham and three of their daughters have had to relinquish part of their stately home Farleigh Place to local soldiers. Their third daughter Pamela is working a secret government job at Bletchly Park and nobody has heard from their second daughter Margot, who was designing clothes in France, for a long time. When a young London boy Alfie who is billeted at the gamekeeper’s house stumbles across a grisly discovery, he and Lady Phoebe, Westerham’s youngest, rush to tell the authorities. The mysterious body draws family friend and the son of the local Vicar Ben Cresswell back to Farleigh on a top secret mission. Ben grew up rubbing shoulders with the likes of the Westerhams, and although he finds an old flame rekindled, he discovers that maybe he doesn’t know the people in those circles as well as he thought he did.

This book is a great little romp perfect for a bit of weekend escapism. I’m loathe to say it because I’m sure the comparison has been made over and over, but if you enjoy period dramas like Downton Abbey or Upstairs Downstairs, especially against the social equaliser background of the second world war, you’ll most certainly enjoy this. This story is another snapshot that adds to the mosaic of the British war experience and the remnants of the English gentry. Bowen has an easy, fluid style of writing that lets the story speak for itself. Her dialogue is particularly enjoyable, and her foray into M15, codebreaking and double agents is compelling reading. I particularly liked her treatment of women and romance in this story, and felt that she gave a real sense of the desire of young women of the times to gain useful knowledge and skills to do their part. I also liked how she handled the changing social attitudes towards sex and explored the diversity of sexual expression without judgment.

This is Bowen’s first standalone novel and it is a very enjoyable read that is clever enough to be engaging, but simple enough to relax into.