I picked this book up goodness only knows how long ago from the Lifeline Book Fair. It was clearly a graphic novel, but it has an enigmatic front cover. I actually assumed that it was about a bird called Griffin (it is not). Given how dire things were getting for my 2019 Goodreads Reading Challenge, I decided that this book had sat on my shelf long enough. 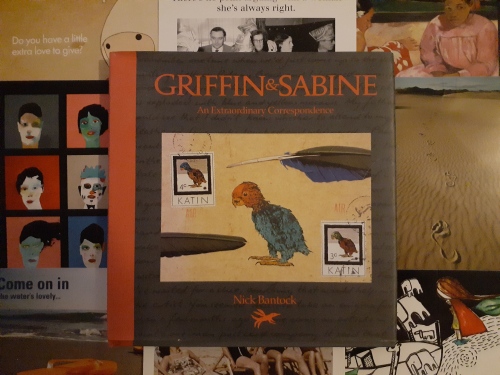 “Griffin & Sabine” by Nick Bantock is a graphic epistolary novel about an artist called Griffin who begins receiving mysterious postcards from a tropical island far away, written by someone called Sabine. From the outset, Sabine appears to have intimate knowledge about Griffin and his artwork, and as their correspondence becomes more and more involved, Griffin begins to wonder who she really is.

This is a stunning piece of fiction, expertly executed with illustrations, writing and even fold-out letters. Bantock is clearly a creative genius who is able to manifest two distinct voices and bring them to life with striking and original designs. Looking at the cover of this book, I had absolutely no idea what I was in for and I enjoyed every second. I was also thrilled that even though I bought it secondhand, all of the pieces were still intact and I was able to enjoy the tactile experience of lifting the longer letters out of their envelopes.

A shining example of the graphic novel genre, and a story that left me equal parts delighted and disturbed.