The Adventurous Princess and Other Feminist Fairy Tales

If you listen to my podcast Lost the Plot, you may recall that I spoke to this author some time ago about her plans to run a crowdfunding campaign to publish her feminist fairy tales. Very excitingly, the campaign was successful. Even more excitingly, the campaign reached almost five times the original goal which meant that the book included four more fairy tales than originally anticipated. I received my copy late last year, and I couldn’t wait to read it.

“The Adventurous Princess and Other Feminist Fairy Tales” by Erin-Claire Barrow is a collection of illustrated short stories inspired by traditional fairy tales and reimagined from a feminist perspective. Barrow takes on some familiar stories such as Cinderella, Beauty and the Beast and Snow White as well as some lesser known ones like Allerleirauh and The Goose Girl. Each story features a diverse cast and an empowering twist on the original plot of the stories.

The absolute highlight of this book is without a doubt the illustrations. Barrow’s striking and whimsical watercolours bring the stories to life and reinforce the image of diverse women at the centre of these classic tales. Barrow’s women are ethnically diverse, queer, disabled, older, larger, young and gender non-conforming. Barrow’s women have jobs, dreams and callings but most importantly, they have agency. They make their own decisions and when they ask for help, it is from a place of strength rather than weakness. The stories themselves are succinct and accessible, and girls and women of any age can enjoy them. I particularly liked the shorter stories that turn stereotypes on their heads and bring otherwise ridiculous stories to a satisfying ending.

Quite a few people have reimagined fairy tales, including, famously, Roald Dahl in his “Revolting Rhymes” and increasingly in Disney films. What is different about this book is that it is not just about empowering conventionally beautiful straight women, it is about representing women from all backgrounds. I think that the only additional woman I would have liked to have seen is a trans woman, and I look forward to seeing future illustrations and stories from Barrow.

An accessible and inclusive take on traditional fairy tales that can be enjoyed by readers of all ages. 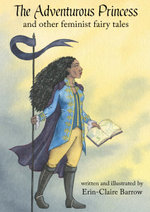