“The Northern Reach” by W. S. Winslow is a family saga set in and around the small fictional coastal town of Wellbridge in Maine, USA. Spanning about 100 years and the four intersecting Lawson, Baines, Moody and Martin families, traumas echo through the generations against the dramatic Maine coastline.

This was a really readable novel with an exceptionally strong sense of place. Winslow has a real strength for characterisation and each point of view character has a unique and distinct voice. I really enjoyed Liliane, the sophisticated French woman who finds herself widowed in unwelcoming Wellbridge. I also really liked the sisters Coralene, Marlene and Earlene and the subtleties in their relationships and Winslow’s hints of infidelity. Winslow also thoughtfully and sensitively explores family trauma and how they impact not just the immediate generation but the subsequent generations afterwards. The moody coastal atmosphere is also complemented by some ghostly visitors.

The only thing that was a bit challenging about this book was keeping track of all the families. Winslow helped a lot by providing a full family tree at the beginning of the book and then specific branches throughout, however reading an eBook did make it a little hard to flip back to the diagrams.

An immersive and insightful novel about the complexities of families, relationships and small towns.

I first heard about this novel when it won the 2017 Goodreads Choice Award for Best Fiction. Since then, it has been adapted into a TV miniseries that was released earlier this year. I’ve been really enjoying some of Reese Witherspoon’s work adapting books to film, so I picked up an edition of this book with a tie-in cover. After Marie Kondoing my bookshelf this year, and doing the #StartOnYourShelfathon challenge, I’ve been making a big effort to chip through my to-read shelf (yes, shelf!) and it was time to read this book.

“Little Fires Everywhere” by Celeste Ng is a realistic novel about a real town called Shaker Heights. The story is about two families. The Richardsons are a well-to-do family with husband, wife and four children while the Warrens consist of a single mother and her daughter. When artist Mia Warren rents a small home from Mrs Elena Richardson, she promises her daughter Pearl that they will be able to stay there for good this time. Pearl quickly befriends Moody Richardson, then his siblings Trip and Lexie. Meanwhile, youngest daughter and black sheep Izzy begins to visit Mia and assist her with her work. As the family grows more and more intertwined, journalist Elena begins to grow suspicious of Mia’s past life and starts trying to investigate.

This is a strong novel that examines a small community and the forces that shake up its apparent idyllic existence. Ng is particularly concerned with motherhood, what makes a good mother and who deserves to be a mother. This book also examines class, race and profession and the ways in which these factors impact someone’s “suitability” as a mother. At the heart of the novel is a fascinating ideological controversy in its own right that in turn drives a wedge between Mia and Elena and kickstarts Elena’s skepticism about Mia’s background. This is a very readable novel, and I really enjoyed the earlier chapters as Pearl begins to navigate friendships with Moody, Trip and Lexie.

While this book is very readable, I did find myself a little disappointed at the ending. The opening pages of the book are very compelling and hint at a significant mystery to unfold. Without giving too much away, I felt that rather than the “spark” Ng hints at throughout the novel, the ending was an underwhelming fizzle without any of the twists or big reveals that I felt had been promised earlier on.

A well-written and insightful book that I wished had a bit less contemplation and a little more punch at the end.

“The Horse Whisperer” was, I think, the first book I read as a kid that was specifically geared for adults. I quite innocently read it because I was extremely into horses and thought it had something to do with this guy Monty Roberts, an actual horse whisperer, who I had read about. Although the book starts out with a girl not too much older than I was and her problems following a horse-riding accident, it quickly turned into another kind of story. While it hadn’t been the kind of book I was expecting, I enjoyed it a lot and even went to go see the Robert Redford and young Scarlet Johansson film adaptation with my best friend (also horse-mad). His debut novel, the author wrote two more that I really enjoyed and then a fourth that I wasn’t so crash hot on. I actually hadn’t even realised he had written a fifth until I came across it at the Lifeline Book Fair. This is another book that has gathered dust on my shelf for a long time, and during these times of isolation, I’m trying to do something about my ridiculous to-read piles. Yes, that plural is correct.

“The Brave” by Nicholas Evans is a novel about an eight year old boy called Tommy whose parents send him to boarding school. A sensitive kid who still struggles with wetting the bed, Tommy is passionate about playing cowboys and Indians and watching his heroes in Westerns on TV. However, at the boarding school, he soon finds himself the target of merciless bullying and the few allies he makes are tenuous at best. After writing to his sister Diane about the horrible experience, the truth is revealed to Tommy about his identity, and soon he finds himself moving to Hollywood and meeting the actors who are his idols. Nearly fifty years later, Tom is a writer living in the USA struggling not to compare himself to his more successful peers. When his son, estranged after deciding to enlist in the armed forces, is charged with murder during an overseas deployment, Tom must try to repair their broken relationship by facing what happened in Hollywood.

Evans is an incredibly readable writer and with smooth prose that is engaging without being too challenging. He tackles a lot of different issues in this book including bullying, domestic violence, identity, war, state-sanctioned violence, mental health and family. I thought that the scenes early in the book where young Tommy is experiencing the brutality of British boarding school were particularly effective and reminiscent of Roald Dahl’s autobiographical book “Boy“. Although Evans is an English writer, the way he writes about America is always very compelling. This is true of this book especially, which at heart is about a man who comes to the USA as a young boy and makes it his home.

Although a relatively easy read, this isn’t my favourite of Evans’ books. Evans usually constructs his novels around an interesting job: horse whisperer, firefighter, even wolf biologist. He also has a keen interest in the physical environment and natural beauty of the USA. While I get that this book is comparing the fantasy of Western film and TV with the reality of Hollywood, particularly the dark underbelly of the entertainment industry, I just didn’t find the book as effective as his previous efforts. The twists I felt you could sense a mile away. The parallels between Tom’s experiences and his son’s experiences didn’t feel as strong as they could have been. Finally, the ending felt just a little too tidy.

An easy read that addresses some important social issues, but ultimately not as hard-hitting as some of his other novels.

A new book club has started up at my work so of course I’m in the thick of it. We put together a list of critically-acclaimed and diverse books and encouraged people to choose whichever books piqued their interest from the list. Although this author’s work has been published extensively, I hadn’t heard of her before. I have been making a real effort to read more Aboriginal and Torres Strait Islander authors, so I thought I would start with this one.

“Too Much Lip” by Melissa Lucashenko is a family drama about a woman called Kerry, on the run from police, who drops in to see her dying grandfather before fleeing across the border. When she arrives, her brother Ken is on edge, her mother Pretty Mary is a mess, and her nephew Donny won’t speak to anyone. Her girlfriend is in jail and she’s just met a dugai man who is very keen on her. The family’s beloved river is in danger, her backpack is missing and to top it off Kerry can’t keep her bloody mouth shut.

This is a necessary book that brings to life a dysfunctional but completely relatable family. Lucashenko has a real talent for realism and the small town of Durrongo and the Salter family are effortless to imagine. Piece by piece, she unpacks the family’s dynamics to uncover not only past traumas but to uncover a way forward. Kerry is a great point of view character through which Lucashenko explores the themes of power, racism and morality. Morally ambiguous herself, Kerry dances a fine line in almost every action she takes, seemingly pulled in several directions by respect for family, culture, money and doing what’s right. I thought Lucashenko did a really brilliant job of building empathy for the family while still being critical of their less-than-savoury actions.

Although I really enjoyed Lucashenko’s writing, characterisation and exploration of themes, I think the one thing I struggled with a bit was the plot. I completely get that part of the comedy was the outrageous actions and coincidences and everything being a bit extra, but there were a couple of parts in the story, particularly towards the end, that I would have liked a little more subtlety. I felt that Lucashenko already engaged the reader enough with the way she tackled real-life issues and wrote her characters, and some of the mayhem at the end of the book felt a bit superfluous.

Whichever way you look at it, this book is definitely a reality check. If you’re looking for an Aussie family drama about the kind of family that doesn’t get written about so often, this is a great book to try.

Too Much Lip – Amazon Australia 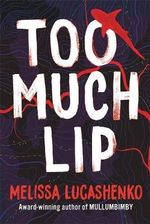