Gods of Jade and Shadow

After rushing to meeting my reading goal last year, I decided I wanted to start off the book with something that looked really appealing. This book jumped out at me in Harry Hartog. The cover is so beautifully designed (purple and turquoise are my favourite colours) and when I read the blurb I simply couldn’t resist. 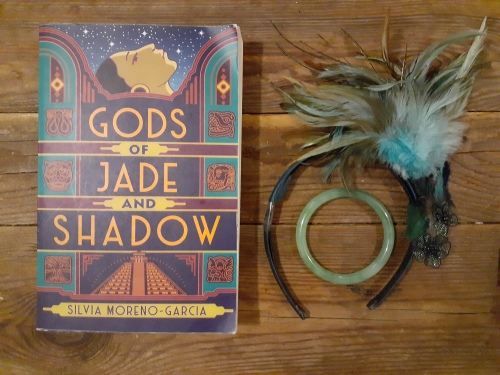 “Gods of Jade and Shadow” by Silvia Moreno-Garcia is a fantasy novel set in 1920s Mexico. The story follows Casiopea, a young woman who is relegated to doing menial housework in her wealthy grandfather’s house while her cousin, a young man of a similar age, is allowed to socialise and spend their grandfather’s money. One day, when Casiopea is made to stay home while her family go out, she opens a mysterious chest in her grandfather’s room and accidentally sets a Mayan god free. Bound together, he promises that if she helps him regain his thrown in Xibalba, the Mayan underworld, he will grant her every wish she has. Eager to escape her life, Casiopea accepts. However, it is only once they are on the run from region to region in Mexico, that she realises how much is truly at stake.

This is an original, complex novel that brings a colourful period of Mexico’s history to life. Moreno-Garcia explores the diversity of Mexican culture, society and landscape and expertly handles the tension between traditional Mayan beliefs and modern values. Casiopea is a great protagonist through which Moreno-Garcia examines multiple perspectives, but of particular interest is own Casiopea’s identity as biracial woman. I really enjoyed how Moreno-Garcia handled Casiopea’s rebellion against the traditional female role that had been set for her. I also really enjoyed how Moreno-Garcia takes the reader on a journey through Mexico, and the sense of place from desert to cenote is very strong throughout. Moreno-Garcia has a very unique style of writing with a lot of original and colourful imagery. I loved the scenes between Casiopea and Hun-Kamé, and how as they grow closer, they begin to lose parts of themselves. Moreno-Garcia leaves the reader with many questions about what it means to be human, and what it means to be a god.

Although I enjoyed almost everything about this book, Moreno-Garcia’s writing, while almost always refreshing, was occasionally a little startling with some rather idiosyncratic turns of phrase. I also felt that while, on balance, the ending was the right one, things were left perhaps a bit too open-ended for me. Without giving too much away, I think it would have been stronger if the character Loray had been fleshed out a little more throughout the story.

A really enjoyable read that was as pretty inside as it was out.

This is one of those books that everyone seems to nod knowingly when you mention its name. The title just rolls off young tongue when you say it, and is so evocative. I always thought it referred to the craving for water you often feel after eating chocolate. However, I later found out that it actually refers to a Spanish phrase meaning emotions almost boiling over, referring to how hot chocolate is made in Mexico. After watching the film adaptation of the book, I managed to somewhere find an incredibly battered copy of the book. The copy was so battered, it is literally the first book I think I’ve ever seen with an actual bookworm. Nevertheless, I was very ready to read it.

My attempt at making one of the book’s recipes, cream fritters,. I think I under-cooked the custard, or under-beat the egg white, but anyway I only managed to fry up three of them before everything essentially disintegrated, so if any colleagues are reading this, I was going to bring this into work, but be grateful that I didn’t! Also, after the fiasco of trying to fry a fourth fritter, there was no chance I was going to attempt the complicated syrup recipe in the book (more egg white) so I just went went with golden syrup. They tasted OK in the end, like very rich eggy pancakes, but a far cry I’m sure from what Esquivel had in mind.

“Like Water for Chocolate: A Novel in Monthly Instalments with Recipes, Romances and Home Remedies” by Laura Esquivel and translated by Carol and Thomas Christensen is a Mexican magic-realism romance novel. The story follows Tita, the youngest of three daughters in the De La Garza family, who falls in love with a man called Pedro. However, as the youngest daughter, Tita is forbidden to marry by her mother who instead forces Tita to look after her until she dies. In an interesting twist of logic, Pedro decides to instead marry her sister Rosaura in order to remain close to Tita. However, confined by her duties and relegated to the kitchen cooking the most sumptuous meals, it isn’t long before Tita’s emotions start to seep out.

This book is simply delightful. I have a real soft spot for books that have recipes in them, and this entire book is peppered with traditional, hearty Mexican recipes. Real soul food. I love how intertwined Tita’s cooking was with her emotions, and I loved the subtlety of the magic that sweeps through the house whenever Tita becomes emotional. I also loved the story of Gertrudis, the middle sister, who is a beacon of sexual liberation and girl power. It’s a wild tale, with increasingly outrageous and unlikely events, and it is immensely fun to read. I really enjoyed Esquivel’s writing, and there is a tongue-in-cheek aspect to it throughout the entire novel.

I think that there were just a few things that were a bit annoying about this book. I found the interlude where Tita leaves the manor in a great state of depression to be really quite tedious, and the characters that were briefly introduced at that point to be pretty beige (although an interesting insight into the ethnic diversity of Mexico). I also wasn’t that sold on Pedro either, who seemed to be throughout the story an irredeemable idiot.

Nevertheless, a magical Mexican romp that will leave you in a state of incredulity. Definitely worth a read if you want something that doesn’t take itself too seriously.