Tag Archives: murder in the mail

Murder in the Mail: A Bloody Birthday

I received an early review copy of “Murder in the Mail” courtesy of the curator Felicity Banks, and you can hear her talk about this project in detail and interactive fiction generally on the latest episode of my podcast Lost the Plot. You can also sign up to “Murder in the Mail” yourself by checking out the Kickstarter campaign, which closes on 14 April 2018. 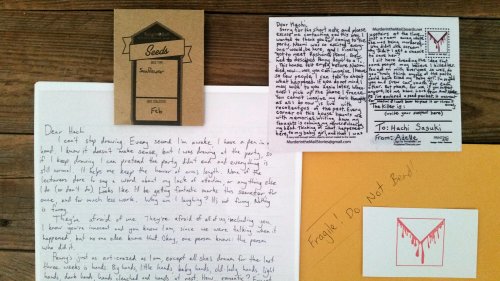 “Murder in the Mail: A Bloody Birthday” by Felicity Banks is an interactive fiction series of letters, postcards, artwork, photographs and objects that are posted to you over the course of 8 weeks. You are Hachi, a university student whose cousin Naomi was murdered at her own birthday party. There were six people aside from Naomi who attended the party: you, Naomi’s mother and four art student friends from university. They all agree to send you letters and their artworks about what happened that night, and it’s up to you to interpret the clues and figure out who is the murderer.

This is a really fun, engaging way to experience a murder mystery. As a reviewer, I received nearly all the parcels in one hit and I was racing through them to find out more information and read more clues. However, I think stretching them out over 8 weeks would be even better way to experience the anticipation and intrigue of what is coming next. The other benefit to stretching it out is the opportunity to discuss your theories on the messageboard with other readers between installments.

The story itself was really enjoyable. I love a puzzle, and I really liked the twists and turns and how each character’s motives and idiosyncrasies emerged over time. There are plenty of red herrings and plenty of interesting social issues jammed into this story, and it’s quite incredible how invested I became in the characters over each installment of the story. The artworks are a great touch to bring life to the story and to give the characters and extra dimension of reality. This is a great example of how a number of authors and artists can collaborate together to make something really interesting.

As I mentioned above, it’s currently only available via Kickstarter but it is an all-or-nothing project, so if it doesn’t its funding goal, you won’t get an opportunity to experience it. If you love murder mysteries and want to support local Canberra authors and artists, I really encourage you to check it out and find out what happened to Naomi.