The Magic Pudding: The Adventures of Bunyip Bluegum

Last year was the 100 year anniversary of this book, and although I was fond of a lot of Australian classics as a child, this one was admittedly one that I had never read. I have quite a few beautiful hardcover editions of these classics with beautiful slipcovers and I was hoping to find a matching edition of this book. I couldn’t find one in exactly the same style, but I did have this copy on my shelf, so I figured it would do for now. 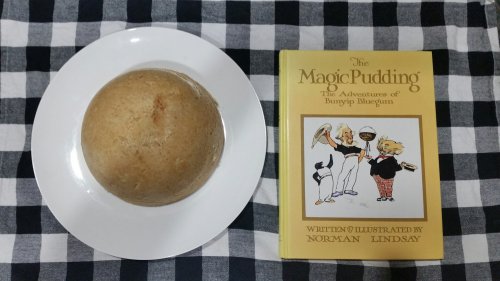 My home-made take on the Old English Apple Hat pudding

“The Magic Pudding: The Adventures of Bunyip Bluegum” written and illustrated by Norman Lindsay is a classic Australian children’s book. The story is about a koala called Bunyip Bluegum who, after getting annoyed by his uncle’s personal grooming habits, decides to venture out into the world on his own. He soon makes the acquaintance of a sailor called Bill Barnacle and a penguin called Sam Sawnoff who are in possession of a magical, infinite and talking pudding known as Albert. Bunyip, Bill and Sam become fast friends however when Albert is stolen, they must use their wits and their fists to get them back. 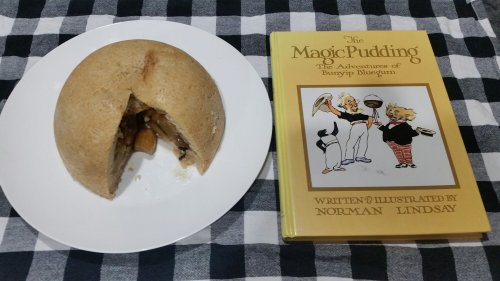 I love funny animal stories, and my absolute favourite part of this book is without a doubt the illustrations. The black and white pencil illustrations at first glance seem very simple, but they are actually unbelievably expressive and effective. Lindsay’s experience as a cartoonist clearly served him well and his characters are all so cheeky and memorable. The characters really make this story and I loved turning the page and not knowing what or who to expect next. The character designs were second to none, be it a rooster, an echidna, a parrot, some policemen, a dog. I also enjoyed how Lindsay divided his book into four ‘slices’ and how the main characters had a song or a ditty for every occasion.

Unfortunately, there were a lot of things about this story that had not aged well. The three women mentioned in this entire book did not actually say any words themselves. One had no lines at all (she was instead hanging out washing while her husband chatted to passers by), one was quoted by the penguin and another was kissed (whether she wanted it or not) by a bosun. Then there is the racism. The book is peppered with disparaging remarks about African people, Arabic people and Jewish people. Even though it is primarily set in the bush and was written in 1918, there is absolutely no mention of Aboriginal people whatsoever.

I won’t go into the legal issues with this story (despite how some of them grated against my law background) because I appreciate that it is meant to be entertaining. I also appreciate that the men in this story are quite diverse, and Bunyip in particular solves problems through his wits and his eloquence. However, I did feel that Bill took larrikinism a little too far, and there was quite a lot of hypocritical violence and double-standards in this book which frustrated me a lot.

One of the downfalls of classic literature is that it frequently contains things that no longer gel with social standards of today. I haven’t quite made up my mind yet about the trend of editing out ‘problematic’ things from older stories, but I do think it is important to acknowledge that things that people used to write aren’t OK anymore. I think that you can appreciate the art of a book, but critique the messages. I think that this is a beautifully illustrated, fun book that nevertheless has its fair share of cringeworthy moments.