The Rabbit Back Literature Society

I can’t remember where I got this book from. Maybe the Canberra Lifeline Book Fair? Wherever it came from, I know exactly why I chose it. It has a gorgeous cover design with blue metallic lettering and any book title with the word “rabbit” in it is always going to hook me instantly. 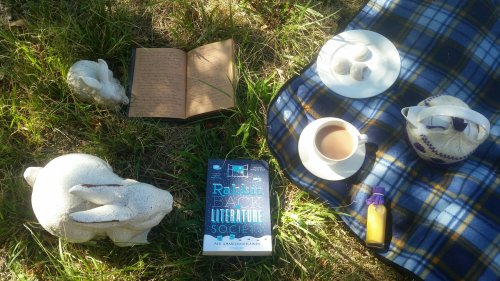 “The Rabbit Back Literature Society” by Pasi Ilmari Jääskeläinen and translated from the Finnish by Lola M. Rogers is a magic realism novel about a woman called Ella who has returned to her hometown Rabbit Back to live with her parents. Reeling from a bad breakup and not fully equipped to deal with her father’s deteriorating health, Ella tries to focus on marking high school papers on literature. However, when she is given a copy of “Crime and Punishment” with a different ending after accusing a student of cheating, the book leads her to the Rabbit Back library. From there, she finds herself more and more drawn into the secretive and wildly successful lives of members of ‘the Society’, and the mysterious Laura White behind it.

I thoroughly enjoyed this book. Jääskeläinen has a piercing and intimate style of writing that is utterly engrossing. The characters, power plays, intrigue and history of Rabbit Back were endlessly fascinating and the story keeps you guessing the entire way through. Ella starts out seeming like a bit of a lightweight, but Jääskeläinen brings a lot of depth to her character and I enjoyed watching her unfurl in different and unexpected ways. I also really liked the other characters and their complicated relationships with each other. There is a lot going on in this book and it’s the perfect blend of quaint and dark.

I think the only issue I had with the novel was that there were maybe one too many loose ends left untied. I am definitely an advocate for leaving things to the imagination and not spelling out every single detail in books, but I think that there were a few things that could have been rounded out a little more. Some of the members of the Society got a lot less airtime than others, and I would have liked to have seen more interactions amongst them and between them and Ella. I also would have liked a bit more on Ella’s parents. Ella seemed to have very few memories of her childhood and I was expecting that gap to get filled in to a degree as she continued researching. However, it never did and I think more backstory on Ella probably would have facilitated even more character development later.

As it stands, this was a very enjoyable book that will appeal especially to lovers of books and secrets.