As I’ve mentioned a couple of times recently, I was struggling to meet my 2018 Goodreads challenge goal of 80 books, so I was scouring my bookshelves trying to find some shorter books and this one caught my eye. I read the first book in the author’s new series relatively recently and I knew that some of the same characters featured in this one, so I thought I’d dip into a bit of world-building and check it out.

“Lyra’s Oxford” by Philip Pullman is a short book set two years after the events of his series “His Dark Materials“. The book includes a short story called Lyra and the Birds as well as a number of tidbits and pieces of paraphernalia from the Oxford of Lyra’s World. Lyra and the Birds is a whirlwind chase for Lyra and her daemon Pantalaimon among the many colleges of the city while following a lost witch’s daemon.

If you’re a huge fan of the series, this is a fun little vacation back into the world of daemons, mysteries and Lyra’s stomping ground. I really enjoyed the fold out map in the centre, and the other fictional documents in the book. I also really enjoyed an older Lyra, juggling studies and socialising but also with the same sense of adventure.

While I enjoyed a lot about this, I wasn’t enormously sold on the plot. Lyra and Pan race around Oxford and while it is certainly an exercise in worldbuilding, and leaves some questions unanswered, I didn’t really feel like as a self-contained story there was much in the way of plot and character development. I think I preferred his other companion book “Once Upon a Time in the North”, a rollicking story about the inimitable Lee Scoresby and his daemon Hester.

A fun little book for fans of “His Dark Materials”, but not quite as satisfying as the novels. 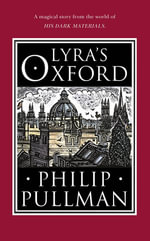 I’ve been anticipating reading this book ever since I heard that Philip Pullman was going to write a second series of books set in the same world as the “His Dark Materials” series. It’s a large book with a beautiful cover with bronze foil lettering and stylised artwork and the hint of daemons, and I was very keen to make a start on it.

“La Belle Sauvage” by Philip Pullman is the first book in the “Book of Dust” trilogy which is set alongside the events of “His Dark Materials”. The story is about Malcolm, a bright young boy whose parents own an inn. In addition to school and working for his family’s business, Malcolm helps the nuns at the priory nearby and takes great interest when a baby called Lyra arrives into their care. However, Malcolm isn’t the only one taking an interest and as the unrelenting winter rains continue, Malcolm finds himself drawn further and further into intrigue that is both political and religious.

First and foremost, I enjoyed this book. Malcolm was a great protagonist and I felt like Pullman achieved the perfect balance between depicting his resourcefulness and relative maturity yet paying homage to the fact that he is nevertheless a child in over his head. I actually think I liked Malcolm better than I liked Lyra in some ways. Malcolm and his daemon Asta seemed to be more united and more of a team than Lyra and Pantalaimon who were often at odds with one another. Pullman really invested a lot of time into Malcolm’s character and the things like his migraines, his boat and his family all rounded him out. I also really enjoyed the interplay between Malcolm and the sullen Alice, and I felt like the development of their friendship was a highlight of the book. Since we have returned to Lyra’s world, it was really interesting to see some of the new things that Pullman drew out about the concept of daemons, especially Alice’s daemon Ben and a certain hyena daemon, and I would have liked to have seen a bit more about that (which of course is more about his views on the soul).

This book felt much darker and more adult that the “His Dark Materials” series, with sex and sexuality as more prominent themes. I think if I had children, I’d be concerned about them reading this book too young – even though Malcolm himself is a young character. I enjoyed the tension, intrigue and buildup early in the story, but then the more the book progressed, the less sense it started to make. I felt like where “His Dark Materials” was fantasy with a sort of scientific twist, which helped suspend disbelief, this book seemed to move much further into typical fantasy and I’m not sure it was in keeping with our understanding of Lyra’s world. The second half of the series certainly had more than a touch of “The Odyssey” about it, and I’m wondering whether Pullman might flesh out these other elements later on in the series.

I think if you were a fan of “His Dark Materials”, you won’t be left disappointed reading this book but you almost certainly will be left confused. It sounds like the second book is already in the works, so hopefully it won’t be too long before we can dip our toes back in the world of daemons.