Tag Archives: speaking out: a 21st-century handbook for women and girls

Speaking Out: a 21st-Century Handbook for Women and Girls

I first read one one of Tara Moss’ books when I was a teenager. I’ve never much been into crime fiction, but there was something about her debut novel “Fetish”that stuck with me. So when I heard that Tara Moss was coming to Canberra to launch her new non-fiction book “Speaking Out: a 21st-Century Handbook for Women and Girls”, I knew I had to go. Not only was Moss a thoughtful and thought-provoking speaker herself, but she was also lovely and signed a copy of her book for me.

There really is no other way to describe “Speaking Out” than as a handbook. It is a step-by-step guide specifically for women and girls to enable them to communicate effectively across a variety of platforms. The book is divided into three parts: why speak out, how to speak out and what to expect when you speak out. The first section provides an overview of gender inequality in communication, with a particular focus on representation of women in media and politics. The second section systematically goes through talking, public speaking and writing in a variety of mediums (including ethical research). The final section, which is the longest part of the book, is full of tips and strategies on how to deal with someone trying to silence you. 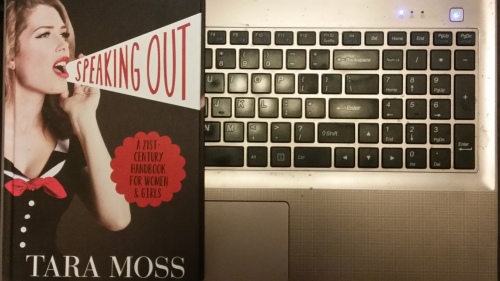 After reading this book, the thing that really stood out to me is how accessible it is. I think that any woman from any background could actually get a lot of value out of this. It is informative without being condescending and it is engaging without being too simplistic. Moss has a clear and open style of writing with the occasional wry twist. I was also very impressed at how well-researched this book was and how meticulous Moss had been with acknowledging every source. I also really liked that there was a strong focus on social media, which I have taken a big interest in lately.

“Speaking Out: a 21st-Century Handbook for Women and Girls” is a fantastic practical guide for any woman or girl who wants advice on how to communicate more effectively. I actually think that this would be a really great book for younger women who are just starting to find their voices, and who might really benefit from some considered information about using social media appropriately, standing up for themselves and writing and researching ethically.