Wundersmith: The Calling of Morrigan Crow

If you haven’t read the first book, skip this review because there will be spoilers.

I read the first book in this series some time ago, and although I felt that it wasn’t so unique as to be mindblowing, it was nevertheless an enjoyable read. When the second book came out recently, I thought I’d give it a go.

“Wundersmith: The Calling of Morrigan Crow” by Jessica Townsend is a children’s fantasy novel and the second book in the “Nevermoor” series. The story picks up shortly after Morrigan has been accepted into the Wundrous Society after completing a number of trials. One of nine new members in unit 919, each is bound to keep Morrigan’s secret: that she is a wundersmith. A powerful wielder of magic feared by the citizens of Nevermoor. Unfortunately, as a result, Morrigan is excluded from all classes except for the history of catastrophes caused by other wundersmiths before her. Soon, with citizens of Nevermoor disappearing, Morrigan becoming more and more isolated and letters threatening to expose unit 919’s secret unless each member participates in a nigh impossible tasks, it is seeming less and less likely that Morrigan will every truly be a member of the Wundrous Society.

I actually enjoyed this book quite a bit more than the first one. I felt like Townsend has hit her stride and plot-wise, this book was interesting and cohesive. I enjoyed how she kept several mysteries going at once, and wove in what Morrigan was learning about the city of Nevermoor seamlessly into the solutions. I also felt that the worldbuilding was stronger in this book, and I felt that I was starting to get much more of a sense of Nevermore and how the world works. As miffed as Morrigan was about the history lessons, it was an ingenious way to round out some of the context of why the people of Nevermore are so frightened of Wundersmiths. I also enjoyed the trisky lanes and learning a bit about the geography of Nevermoor. Finally, I thought that Townsend’s exploration of good and evil was much stronger in this book with as many twists and turns as the tricksy lanes themselves.

Although I did think that this book was stronger than the previous, I did occasionally feel that sometimes this book was quirky for the sake of being quirky. I also felt that, although it wasn’t as the first book, this book does still borrow a lot of themes from other young fantasy books I have read. There were still quite a few tropes, but I do feelt that this series is starting to come into its own.

An engaging book that picks up where the first left off and lifts the story to a new level. 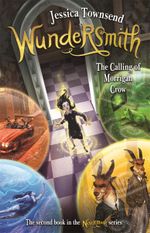