Margaret Atwood’s “The Robber Bride” was the February book for one of my book clubs. I have been a long-time Margaret Atwood fan, and she is an absolutely exquisite writer, so I was super excited to read this one.

“The Robber Bride” follows the lives of three women who become friends after each has a run in with the sassy, sexy and somewhat sinister Zenia. Although they don’t seem to have much in common with one-another apart from these experiences, Tony, Charis and Roz form a lasting friendship together which continues after Zenia’s apparent death. When she turns up in a restaurant while they’re having their monthly catch-up, each of the three women is catapulted back into the past to face the demons they thought they’d put to rest. 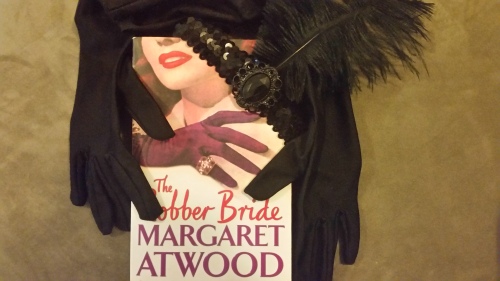 Nevertheless, this was simply not my favourite Margaret Atwood novel. “The Handmaid’s Tale” was a better feminist novel. “Cat’s Eye” did a much better job capturing the nuance of female friendship. “The Blind Assassin” was a far more sophisticated glimpse into changing times and at executing twisted endings. Zenia was a really problematic antagonist. I think it would have been better to have either committed to the idea that she was somehow supernatural, or done away with the air of mystery altogether and made her more realistic and relatable. I had a lot of trouble stomaching the three women who were slaves to her and slaves to their men. I also had a lot of trouble stomaching all the weak men who were slaves to their own baffling sexualities.

If Zenia had been redefined somehow, I think that this could have been an extremely powerful novel about coping with the aftermath of war. As it was, it seemed to fall a bit flat and was lacking in the cleverness and intricacy that Atwood is so well-known for.

One response to “The Robber Bride”