I have been reading this author for a long time, and he has an impressive bibliography of novels that straddle the blurry line between fantasy and realism. This book has been sitting on my shelf for quite a while after my partner bought it for me, and I have to admit, the cover had not really attracted me. I know the artist is incredibly well-known, and while I agree the style is probably in line with the themes of the book, it is a bit skeletal and knobbly for my tastes. It sat there gathering dust for some time until I thought, I just need two more books to finish my 2018 Goodreads Reading Challenge, this one looks relatively short and it has been a while since I’ve read this author. 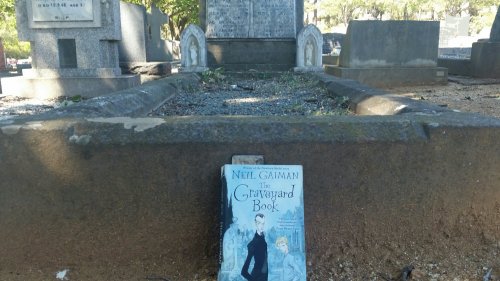 “The Graveyard Book” by Neil Gaiman is a young adult fantasy novel about a little boy called Nobody Owens who lives in a graveyard. Narrowly escaping murder like the rest of his family by the man Jack, Bod, as he is affectionately known, is granted refuge among the ghosts and creatures who live in the graveyard. Although adopted by Mr and Mrs Owens, and watched over by his mysterious guardian Silas, Bod is given a large amount of freedom within the confines of the graveyard. However, the protection cannot last forever, and sooner or later Bod must return to the real world and live his life.

This, at heart, is a book about growing up. Gaiman sets the scene by introducing the graveyard, its features and residents and uses them as a yardstick to measure how Bod grows and changes over time. In his usual subtle way, Gaiman explores the differences between good and bad, child and adult, accepting help and self-reliance – all things that young people must navigate as they start to find their own way in the world. This is also a book about boundaries, which ones are flexible, which ones are permeable and which ones must remain steadfast. Gaiman is never condescending in this book, and I think that the way that he writes about the challenges Bod faces leaves a lot of room for young readers to make up their own minds about the way things turn out. I really enjoyed how Bod aged over time, and I think it’s quite rare for a children’s book to really examine how children’s personalities develop.

I think the problem I had with this book is that while it is undeniably rich, at times it felt a bit constraining while reading it. I completely understand that Gaiman explores different kinds of freedoms and deliberately uses the border of the graveyard as both a physical and metaphorical barrier. However, because the majority of the story is set within the graveyard, and a lot of the story is Bod revisiting places and people within that graveyard, there were times where the book feels a bit repetitive.

Nevertheless, a complex and sophisticated young adult novel in Gaiman’s trademark style that I think many kids would enjoy. 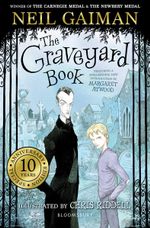