Even Cowgirls Get the Blues

I’ve had a couple of people recommend the author Tom Robbins to me. One person I really like and respect, another I met at a party and wasn’t particularly impressed with. Two separate recommendations, though. I was intrigued enough to pick up a battered secondhand copy of “Even Cowgirls Get the Blues” and give it a whirl.

Wow. I had absolutely no idea what I was walking into. “Even Cowgirls Get the Blues” is about a girl called Sissy who was born with unnaturally large thumbs. She grows up to be a model for feminine hygiene products and also becomes America’s greatest hitch-hiker. She then ends up joining a ranch run by women, and it just keeps getting wilder and wilder. There is so much going on in this book, I can’t really put together much more of a synopsis that does it justice. 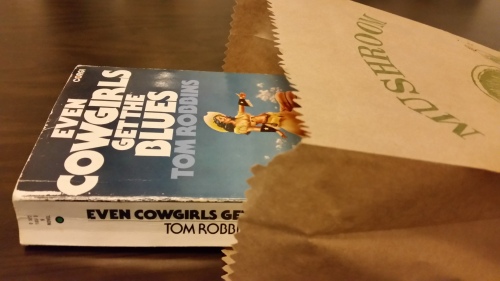 The thing that I love about “Even Cowgirls Get the Blues” is its originality. Everything about it is just so outrageous. The characters are really unique and it’s a great look into issues like feminism, environmentalism and sexuality. It’s kind of unbelievable that it was first published in 1976, and it must have been groundbreaking for its time. Robbins is a great writer, and he knows it. He breaks the fourth wall constantly to chat with the reader and point out inane things like the chapter number, but it’s done really well. There are some fantastic lines in this book including one of my favourites: “The brown paper bag is the only thing civilized man has produced that does not seem out of place in nature”.

The downside to this book is that even though it was clearly pretty radical for its time, it’s now a bit dated. Although there’s heaps of queer content and pretty progressive stuff about women, some of it still  a bit a cringeworthy – not unlike the kind of thing your great uncle might say at Christmas. Also, while Robbins is a great writer, sometimes you kind of want him to stop faffing about and get on with it. This book is definitely more about the journey than the ending though.

So, if you want to read something unlike anything you have before that’s all about life and people and sex and love – you have to give this a crack.

5 responses to “Even Cowgirls Get the Blues”