I received a copy of this book courtesy of the publisher. Described as a literary novel, and with quite a strange cover showing what looks like human skin, I was keen to see what it was about. 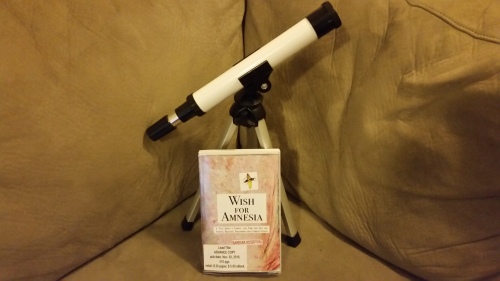 “Wish for Amnesia” by Barbara Rosenthal is a surreal novel about a man called Jack Rubin, his lover and world famous blind African artist Beatrice, his marijuana-addicted wife Caroline, and his genius daughter Jewel. Distancing himself from his Holocaust-survivor parents and plagued by voices which constantly criticise him, Jack finds himself becoming a popular icon for social progress. As he becomes more and more engrossed in his secretive work intertwining computer programming and DNA, he becomes less aware of the goings on in his family. Caroline’s increasing dependence on marijuana, cosmopolitan yearnings and perfectionism directed towards her daughter leads to disaster and Jewel seeks solace in her godmother Beatrice’s arms. When Beatrice experiences a miracle, her actions and inactions afterwards represent ultimate betrayal and the Rubin family is torn apart.

This is such a richly dense novel that I am finding it hard to encapsulate all that goes on in just a few short paragraphs. Rosenthal’s book is literary with an unresolved undercurrent of magic realism and science fiction. It explores themes of intergenerational trauma, intellectualism, mental health issues, addiction, race, disability, sex and love. “Wish for Amnesia” is an insight into the art world and the nouveau riche and explores themes of motherhood, emotional neglect and the mentor/mentee relationship. I found a lot of parallel themes in this novel to that of “The Strays“, especially where the self-importance and apparent genius of the father (and, by proxy, the equally talented but underappreciated mother) overshadows the needs of the child(ren), creating space for their exploitation. I also found parallels to “Maus” and another book I read recently called “The Butcher’s Daughter“, especially to do with the children of Holocaust survivors and their (often futile) attempts to reject their Jewish heritage.

This book is quite dark and each of the main characters are deeply flawed narrators. For the past couple of days I have found myself contemplating the amount of uncertainty was left at the end. Was Jack’s secret project and the information he believed he had found real? Was Jewel’s recollection of the events after the car crash accurate or just adolescent fancy? Was Beatrice really magic and was she really trying to sabotage Jack and his family? There were a lot of unresolved questions at the end of the book as well, especially about the extent to which the key events at the ending were related.

2 responses to “Wish for Amnesia”