Note: I have made some edits to this review following a conversation with the author

I received a copy of this book courtesy of the author. As it turned out, the author is Danish and I managed to read this while I was travelling in Denmark. 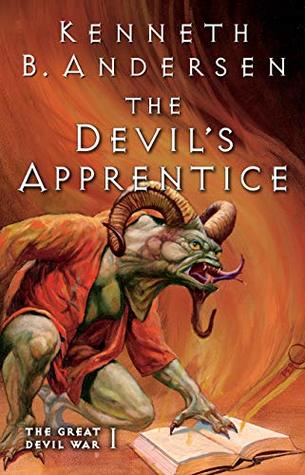 “The Devil’s Apprentice” by Kenneth B. Andersen and translated by K. E. Semmel is a young adult novel about a young teen called Philip who is bullied relentlessly by a classmate. Despite being thoughtful and kind, after a terrible accident, Philip finds himself in hell by mistake. It quickly appears that the Devil is ailing, and while trying to secure the perfect heir for the future of Hell, he ends up with the angelic Philip instead. However, despite Philip’s naivete and strong moral compass, he finds Hell is beginning to grow on him.

This is a book with an interesting question: can innately good kid can learn to be bad? Andersen creates a hell with two castes: demons who live and work there, and human souls who are there to be punished. Philip primarily engages with the demons of Hell, befriending them while they encourage him in his studies to become evil. I like that although Philip seemed to struggle socially on Earth, he managed to befriend a lot of people in Hell. Andersen spends a lot of time exploring friendship, and exploring what it means to be good and evil.

Now, compared to a similar book I read previously where Hell is a hotter, more crowded and more bureaucratic version of Earth where you still have to go to work and pay bills, this book’s version of Hell is more inspired by traditional Christian beliefs, and Philip regularly passes non-demon residents of Hell, known as the condemned, who are trapped in eternal torment of varying types depending on their particular sins.

One thing that was pretty confronting to me was several references to people who had committed suicide being subjected to eternal torment for “taking the easy way out”. Since discussing this issue with the author, he has clarified to me that the intention was only meant to refer to people seeking to escape the ramifications of crimes against humanity on earth. However, this is not entirely clear in the English translation, so I would recommend bearing that in mind while reading.

An interesting exploration of good and evil with universal messages about friendship, bullying, acceptance and agency.

If you are experiencing thoughts of suicide, are feeling overwhelmed or have lost someone to suicide, please contact Lifeline (13 11 14) if you are in Australia, or your local crisis service if you are in another country.

If you wish to learn about suicide intervention, I would strongly recommend the LivingWorks ASIST course (https://www.lifeline.org.au/get-help/topics/preventing-suicide) and Mental Health First Aid training.

One response to “The Devil’s Apprentice”