It’s no secret that I adore Juliet Marillier and her beautiful and whimsical historical fantasy novels. I generally try to space them out, but I am getting towards the end of all the books she’s written (so far), so it has been a while since I have picked one up. Anyway, approaching the end of the year, I was in dire need for a comfort read, and I was very eager to give this standalone novel a go.

“Heart’s Blood” by Juliet Marillier is a historical fantasy novel that reimagines the classic story of “Beauty and the Beast“. The story follows a young woman called Caitrin who is on the run from her abusive family home. Trained as a scribe, when she hears of a job vacancy at the mysterious fortress known as Whistling Tor, locals warn her against it and the disfigured chieftain called Anluan. However when Caitrin arrives, she finds that fear of the known is far worse than fear of the unknown and soon settles into the strange rhythm of the household. While she attempts a seemingly insurmountable task that others before her have failed, she discovers that ugliness is often much more than skin deep.

Marillier, as always, gently coaxes into life sensitive and well-considered characters who overcome hardship and find strength and comfort in one-another. Marillier’s book are and continue to be incredibly inclusive and tackle modern issues through a historical lens. Although this is not the first book of hers with a character with a disability, this book is the first book of hers I have read that really explores the issue of family violence. I thought that she handled Caitrin’s experiences, and the toll they took on her self-esteem and identity, very adeptly and drew out the issues of vulnerability and courage for both Caitrin and Anluan very well. I also really liked that Marillier again made a main character with a disability someone who is capable and desirable.

However, this wasn’t my favourite of Marillier’s books. The plot twist about the true nature of the evil at Whistling Tor I saw coming a mile away, and I felt like a large proportion of the book was spent waiting for the ending I knew was on its way. While I did fully respect that Marillier incorporated themes of family violence into her book, I felt that it could have been a little less distant relatives come take advantage and a little more close to home like unfortunately so many domestic violence stories are. I also felt a little that the way that part of the story is resolved got a bit Jane Eyre towards the end with a bit of deus ex machina in the form of a cart of people going by at just the right time.

Regardless, this is a sweet and enjoyable story and a unique retelling of a classic fairy tale. I read this book in no time at all, and look forward to the next Marillier book I tackle. 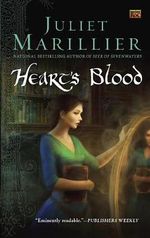