This was a set book for my feminist fantasy book club and one that I was looking forward to. One of my annual reading goals is to read more diversely, and if ever there was a genre in dire need of more diversity, it is fantasy. I bought a copy for my Kobo and managed to read most of it before the book club.

“The Poppy War” by R. F. Kuang is a story about a young girl called Rin who lives with her rather unsavoury foster parents. When the Fangs try to marry her off to an old, rich merchant Rin manages to negotiate being permitted to study for the prestigious and extremely difficult exams known as the Keju. With her sights set on admission to the military academy called Sinegard, Rin’s class and gender look set to be almost insurmountable obstacles. However, when Rin achieves the impossible, she finds herself on a mad path to studying a mad art with an even madder teacher. When war breaks out, Rin finds herself faced with even more difficult choices – choices that may not work and may cost her everything.

I wanted to like this book, I really did, but if there is anything I have learned about myself it is that military fiction is not my cup of tea. Kuang is a spirited writer who imbues Rin with an enormous amount of vitality, courage and determination. The writing is good and the setting is fascinating, and some of my favourite scenes in the book is when Rin first finds herself in the city of Nikan and later when she joins her friend at his luxurious home.

It was the story, however, that I struggled with. It is your classic fantasy bildungsroman where an orphan child discovers talent, joins a school and learns arcane skills to defeat the dark…whatever. As admirable as Rin is, I actually found the peripheral characters like her delightful friend Kitay and the compelling Nezha more interesting than her. While the story started out quite strong, I felt that it soon began to lag. With the introduction, exams, school, training, assignment, war, missions and various discoveries along the way, it’s little wonder that this book bloats at over 500 pages. By the time I got to a major battle, I was feeling pretty worn out by the whole thing and there was so, so much more to go after that.

I also felt that Kuang’s great passion is clearly military history, and despite it also being a fantasy book, the focus is much more on the detail of combat, strategy, battles and power than it is about magic. I completely appreciate Kuang’s expertise in the Second Sino-Japanese War (the inspiration for this book), but I struggled to match her enthusiasm. The magic that is used seems to be unclear, inexplicable and highly dependent on the whims of beings from another plane. I think that the book would have benefited from some of the more rigid principles of writing magic to make the magic more accessible to the reader and therefore more meaningful when used.

This is an epic book that spans years of training, conflict and war and while I was probably looking for more fantasy than military and found it a bit of a slog, I’m sure that there would be plenty of people out there who would find this thrilling. 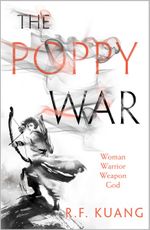 3 responses to “The Poppy War”