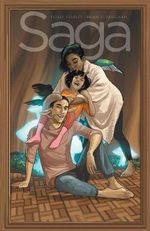 It was the end of a long day at work a couple of weeks ago and my partner had sent me a message saying that pick me up at the carpark. I rode the elevator down and crossed the street, looking forward to being out of the cold and into some comfy clothes. I walked through the carpark until I saw our car, opened the door, and lo and behold! A brand new copy of “Saga Volume 6” was waiting for me right in the passenger seat!

If you’ve been following this blog for a while, you might have picked up my obsession with the “Saga” series. Written by Brian K. Vaughan and illustrated by Fiona Staples, the sixth installment dives right back into the action a couple of years after the last one ended.

I think maybe I enjoyed this one ever so slightly less than the first five, and I think that’s partially because some of my favourite characters didn’t make an appearance.

Anyway, there is still plenty of gratuitous sex, nudity, violence and drug use, the premise is still ludicrous and if you aren’t completely offended by it, it’s still a rip-roaring read.

I have been a fan of Brian K. Vaughan’s graphic novels for a while now. From his heart-wrenching depiction of the true story of the “Pride of Baghdad”, to his mesmerising series “Y: The Last Man” on a post-apocalyptic world without men, Vaughan is a storyteller who works with phenomenal artists to tackle the most difficult and often most poignant of subjects.

The “Saga” series is not one of these stories.

“Saga” is what happens when you decide to completely liberate yourself from all literary anxieties and write exactly what you want. This graphic novel series doesn’t concern itself with avoiding cliches, censorship or scientific viability. Instead, it is an unfettered foray into Vaughan’s imagination and if you come across a familiar theme or trope along the way, well so be it. Fiona Staples’ illustrations are polished, detailed and vibrant and are a standout example of the kinds of quality art that can be found in graphic novels.

The series starts out with a sort of Romeo and Juliet premise. Alana, from a planet of technologically advanced winged people, falls in love with Marko, from a race of magical horned people. These two opposing races are a theme I’ve come across in books such as Sara Douglass’ “Battleaxe” and the equally stunning online webcomic series “Spindrift“. The winged people live on Landfall, and are at war with the people who live on Wreath, Landfall’s only moon. Marko and (the very pregnant) Alana are now on the run from Landfall, Wreath, robot princes with television sets for heads and dysfunctional bounty hunters with talking cat sidekicks. The result is a romping, hilarious, emotionally charged journey and almost every turn of the page leaves you screaming “What?!” in incredulity. The series deals with love, family, relationships, children, abuse, exploitation, overcoming adversity and ideals and is narrated by Marko and Alana’s soon-to-be-born daughter Hazel.

There are four volumes that have been released so far, and I eagerly bought Volume 4 on my holiday in the UK and raced through it in an evening with my eyes veritably falling out my head.

If you are adverse to anything graphic (graphic violence, graphic sex, graphic drug use, graphic language, graphic novel), then I do not suggest you read this series. You will be offended in more ways than you could have believed possible. To give you an idea of what to expect, the first page of Volume 4 is a highly detailed depiction of an alien birth. If you don’t mind a bit of smut and gore, and think you would enjoy as realistic a depiction of the human condition as is likely possible through the medium of a sci-fi/fantasy graphic novel, then get yourself down to your local comic book store and prepare to get hooked.